Welcome to our
Overseas Visitors

The following is based on the memories of "Pub" (Leslie) Smith, written in 1949, one of the founder members of Southampton HF and its first Secretary, (The nickname was given to him because friends said his initials, LP, stood for Licensed Premises.) Information about the Group prior to April 1944 was lost in the bombing not of Southampton but of Pub's Bournemouth home. As a master at Taunton's School he had been evacuated with the pupils to what was deemed a safer place

On the left, is a wonderful rare 1930's view of Lynmouth Harbour showing how the area was before the devastating 1952 floods swept away most buildings on the right.

In 1931 Leslie Smith enjoyed a holiday at the Lynmouth HF, (or Holiday Fellowship as it was still called), so much, that he obtained a list of people in Southampton who had visited these HF Centres, and invited them to join a ramble in the Forest, to discuss the foundation of a rambling club 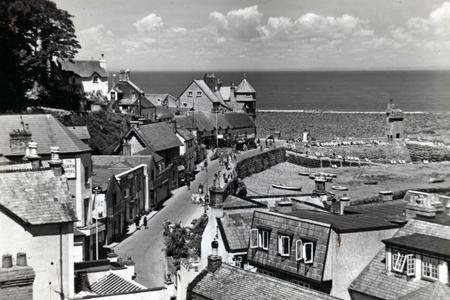 And so it was that on 18 July 1931, they all met at Poundtree Road, Southampton  to catch the 2.30 bus to Lyndhurst; and then walked to Brockenhurst and back. Over a cup of tea it was decided to form a walking club and to hold a further meeting in the Autumn.  (This walk is still commemorated annually - a round trip of about 8 miles.)

On 10 October they chose the Saxon Café, in Commercial Road for a supper, and there the Club was formally inaugurated. Charles Fuller was the first President and Leslie Smith was elected Secretary/Treasurer. The annual subscription was just 2/6d

At first notices of rambles went out singly on Postcards. There was much racing round to find a leader and to find a date convenient for the greatest number of people. Later a messy clay pack duplicator was used. The next step was to plan several rambles together and print them by Roneo. "Pub" and his wife Kathleen met on an HF walk and their marriage in 1934 was recorded in the Log Book of the time by Leslie Burnett, who started the Log Books, and which have continued ever since.

To all those who have actively participated in the Group throughout the years, the current members owe their thanks.